As the only eight-division world champion in boxing and the first boxer to win the lineal championship in five different weight classes, Manny Pacquiao (62-8-2) is used to making history, and he did it again when he announced his return to the ring by being in two places at once.

On December 10, Pacquiao will meet South Korean martial arts star DK Yoo in Seoul in a pay-per-view event presented by Triller Fight Club and FITE, the largest digital sports and entertainment platform in the world, owned by Triller. Pacquiao was in Seoul during a press conference in Los Angeles on Thursday, but he was able to appear live via hologram alongside Yoo to announce the fight.

All fighters that go up into the ring, the intention is to get a knockout,” said Pacquiao. “My style is going to be aggressive with more punches and footwork, because I’m used to fighting a bigger guy.”

WHEN IS PACQUIAO VS. YOO? DATE, START TIME

Described by some boxing historians as the greatest southpaw fighter of all time, Pacquiao is the first boxer to win world championships across four decades and became the oldest welterweight world champion in boxing history at the age of 40 in 2019. During his career, Pacquiao’s fights have generated more than 20 million pay-per-view buys worth more than $1.3 billion in revenue.

DK Yoo is a South Korean fighter who last stepped into the ring last December against former UFC contender Bradley Scott in an exhibition bout streamed live on FITE. Yoo is best known as the master and creator of the Warfare Combat System, a martial arts method that teaches students how to effectively control and utilize the mind and body to achieve their goals.

“I respect Manny Pacquiao, and he’s one of the best boxers in the world,” said Yoo at the Los Angeles press conference. “But I’m younger, I’m heavier, and I have longer arms than him, so I’m going to focus on that.”

““The entire team at Triller is ecstatic,” said David Tetreault, President of Triller Fight Club. “It’s reminiscent of the idea of an imaginary fight that people wanted to do back in the 70s between Muhammad Ali and Bruce Lee. We’re actually doing it with Manny Pacquiao versus D.K. Yoo.”

“We’ve got a number of events to close out the year,” said Tetreault. “We start next week with Lineage of Greatness II, then we move into November with a Future Stars event and another Lineage of Greatness card, and then, of course, the Pacquiao-Yoo fight on December 10. Then, in the new year, it’s all about Triller returning to its roots and doing the blockbusters and entertaining fans around the world.”

TV: Cable, satellite & telco PPV providers, including Xfinity, Spectrum, Contour, Fios, and Optimum (U.S.), among others, as well as leading operators in Canada.

For more information, visit TrillerFightClub.com or text “PAC” to 75303. 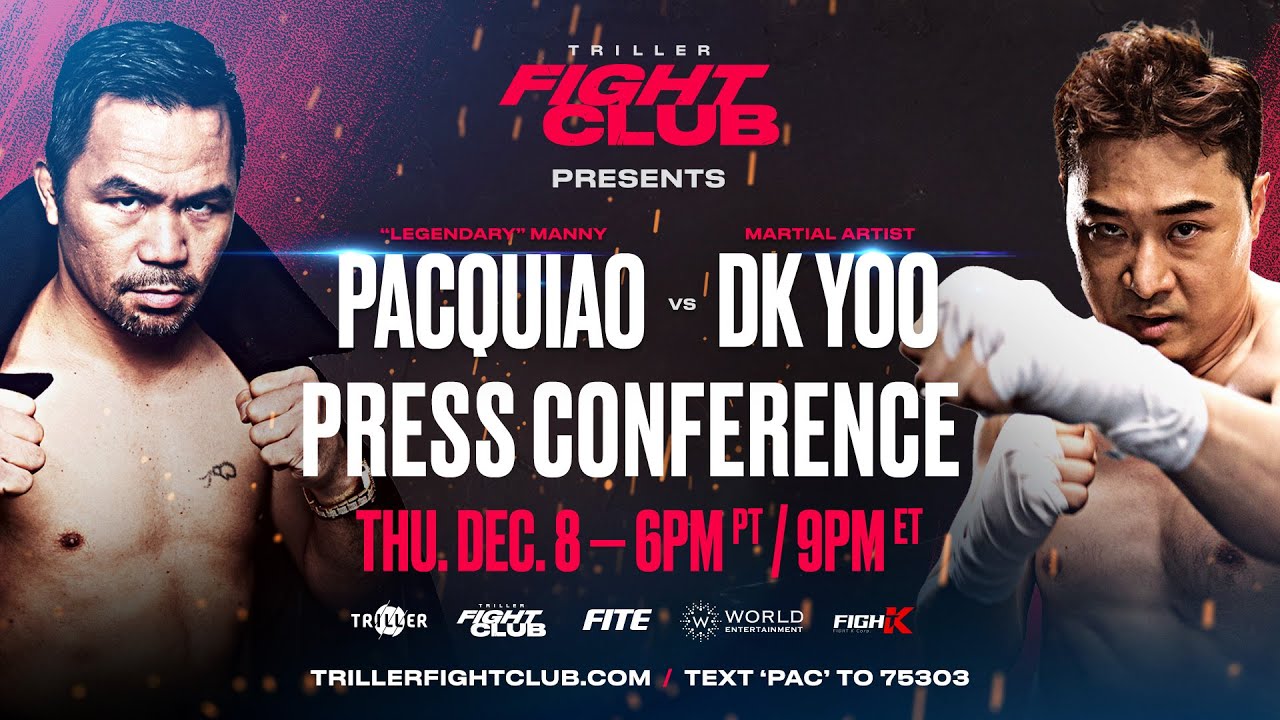